The Maghreb or Maghrib is the name given in pre-modern times by Arab writers on geography and history to the northern part of Africa, that which Europeans often came to call Barbary. The Arabic word maghreb means “place where the sun sets”, i.e. The west, in opposition to mashriq “place where the sun rises”, i.e. The east.
In modern usage the Maghreb comprises the political units of Morocco, Algeria, Tunisia, Libya and Mauritania. To the north, the region is bounded by the Mediterranean Sea, and to the west by the Atlantic Ocean, running from the Straits of Gibraltar southwestwards to the deserts of Mauritania. The eastern boundary is geographically open, and some mediaeval Arab geographers made the Maghreb begin westwards from Alexandria in Egypt, although most accepted that Egypt was in fact outside the Maghreb.
At present, the term Maghreb or Maghrib continues to be used in opposition to Mashriq, but it also can simply imply the Kingdom of Morocco, especially in the form al-Maghrib al-Aqsa “the farthest Maghrib”. In addition, the political union of the North African countries sought by statesmen and politicians since the independence of their respective countries is called al-Maghrib al-Kabir: “The Greater Maghreb”. 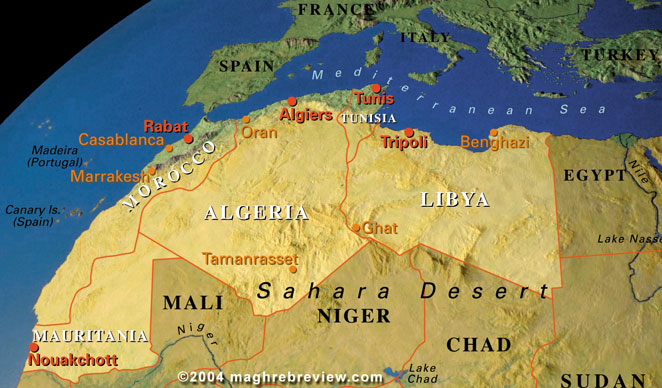 Since its foundation in 1976, The Maghreb Review has devoted itself entirely to the study of the Maghreb countries (Algeria, Libya, Mauritania, Morocco, Tunisia) and Islamic culture and religion. But this focus on the territorial state might be seen as an aberration from longer-term patterns in the Maghreb. One might also argue that the Maghreb can play a unique and dynamic role in a global age. Perhaps the remarkable characteristic of the region is that, while it sustains intense local traditions, it has long been a crossroads with links to sub-Saharan Africa, the Middle East and Europe. Further, it is misleading to call the states of the Maghreb national since they all share a common Berber, Arab and Islamic heritage.
As we enter the twenty-first century, therefore, we would like to encourage more attention to the Maghreb’s crossroads character – to its interaction through migration, trade, travel and cultural-education links with other regions. We would also like to promote theoretically informed comparison with neighbouring regions, including sub-Saharan Africa, the Iberian peninsula, southern France, Italy and the former Ottoman lands, the Middle East and with more distant areas that share related historical experience, such as Central Asia, Southern Africa or South and Central America. The Maghreb Review is politically unbiased.
The journal invites original, well-authenticated articles on any topic related to the areas described above from the earliest times to the present day (history, ethnography, economics, politics, Islamic culture, philosophy and science in the Islamic world, linguistics, literature, agriculture, sociology, anthropology, ethnomusicology, etc).
Scroll back to top